"One of the best Alzheimer's Books of All Time" - Book Authority
Available in paperback, e-Book and audiobook! 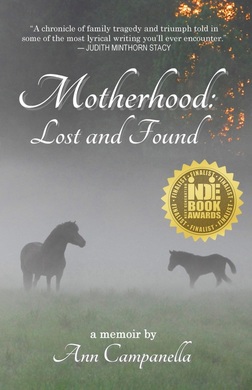 Motherhood: Lost and Found is a memoir by the poet Ann Campanella. She tells the emotional story of losing her mother to Alzheimer's at the same time she is trying to become a mother.

Freelance writer and horsewoman Ann Campanella returns to North Carolina after being away from her family for several years. She teaches horseback riding to a group of young girls who remind her of herself at that age – warm, fun loving, exuberant, fragile. She and her husband are ready to start a family. In her mid thirties, Ann is used to setting goals and accomplishing them﻿. Weakness is foreign to her. But when her mother shows signs of illness and her mind begins to fail at the same time Ann experiences a series of miscarriages, the author senses her world is about to change in ways she can only imagine.

Reviews:
"...some of the most truly lyrical writing you’ll ever encounter. She writes of grief and loss with heart wrenching honesty but without sentimentality then adds humor in such unexpected places I found myself laughing and crying all on the same page."

"A sensitive, in-depth study of one woman’s slow descent into Alzheimer’s as detailed by her daughter, Motherhood: Lost and Found involves us in the dynamic of a multi-generational family as well as the author’s own story: horses, poetry, three terrible miscarriages, and in her 41st year, a final miracle."

When I finished Ann Campanella’s remarkable memoir, Motherhood: Lost and Found, I tried to put my finger on what it was that had gripped me so in the reading of it. Was it the extraordinary dignity that she gave to her mother and father (whose age I am approaching) in the telling of the story? Yes, it was that, but it was something more -- what I would like to call the author’s ability to tell the story without getting in the way of it, without putting herself as character in an obtrusive position. What the book is finally about is not Ann and her mother, but family -- the love of a family -- Rose, Will, Nate and Ann and their parents, and how that love sustained them during a long and painful crisis, and how Ann’s relationship with her husband Joel was deepened and enriched by that crisis, and how three generations are better than two. It is a ruthlessly honest book about pain and suffering, but ultimately it is a redemptive book in which we are left with a final image of symbiotic love. Motherhood: Lost and Found has much to teach us all as human beings.


To order books or find out more about this memoir, visit Ann's website or email her.

What Flies Away tells the story in poetry of the author’s mother’s descent into Alzheimer’s, her father’s sudden death and the miracle of her daughter’s birth. Campanella received the Poet Laureate Award twice for two poems "The Chase" and "How to Grieve," both of which are included in the collection.

The Beach Poems is a collection of poetry inspired by Anne Morrow Lindbergh's Gift from the Sea. After caring for a loved one who had Alzheimer's for 14 years, Ann Campanella went on a series of retreats at the beach. These retreats inspired memories and nourished her soul, ultimately carrying the author through grief to a place of joy.